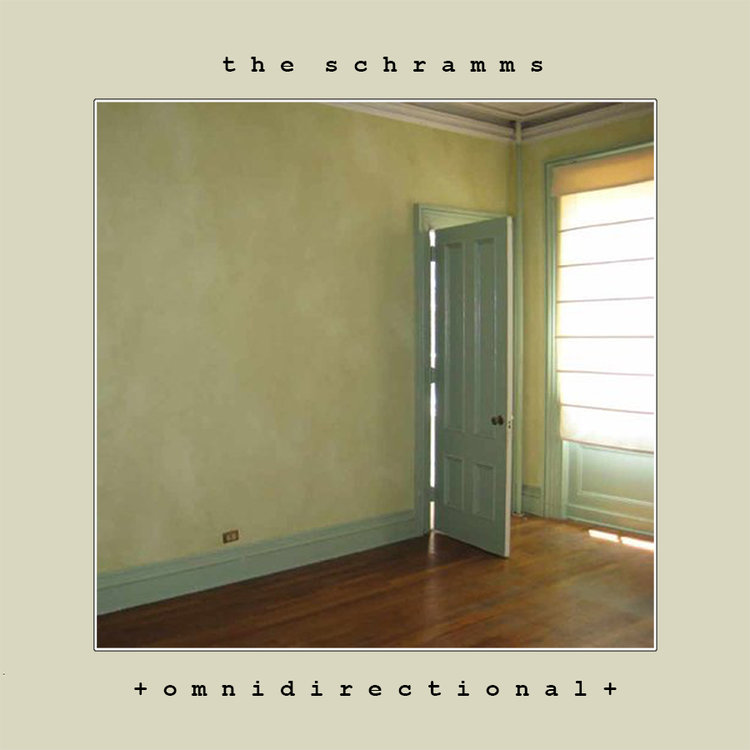 This record came out back in the summer, and definitely crossed my desk then. But it wasn’t really brought to my attention until it was mentioned on the 3 Songs Podcast. For those not familiar, it features former Pavement percussionist and hype man, Bob Nastanovich along with pal Mike Hogan passing the turntable back and forth sharing tunes with each other.  Bob recalled fondly his time living in Hoboken, NJ slinging records, and his fondness for the work of Dave Schramm; who in addition to being a founding member of Yo La Tengo is also the leader of his not so humbly named group, The Schramms. Although according to lore, the name started out as a joke that just happened to stick.

The group’s latest Omnidirectional is an album that according the press release has spent the better part of a decade in the works.  I’m glad it found my ears in the autumn instead of its intended release date, as this wistful collection of songs with its elegant arrangements are much better suited to listening to while the leaves are crashing down.  Omnidirectional is an album that sees Schramm with an itch he can’t seem to scratch, sneaky feelings he can’t seem to nail down, and an emotional geography that seems to subject to change.

The term musician’s musicians seems to get thrown around occasionally when discussing these guys (which in addition to our previously discussed fearless leader, the group also includes features drummer Ron Metz and bassist Al Greller), and I can totally see that. Not many bands can pull off the Brian Wilson informed widescreen mope on tracks such as “Faith Is A Dusty Word,” with this much precision, skill and heart. If there’s a theme that connects these songs, it’s that feeling of uncertainty and doubt that seems to creep in and gnaw at you with tiny sharp teeth as middle age sets in. As Schramm notes on the aptly named “Spent,” “…and we’re happy now, but I don’t know how.” If that makes you think that this album is a real slog through mid-life existential misery though, you would be wrong. It’s a bittersweet collection that pulls you in with a timeless subtle magnetic pull. Whatever direction you’re heading, these songs make for some great companions.

Buy the album via Bar/None.

After hibernating for a decade or so, the Elephant Six Recording Company is relaunching with a promised series of reissues, new releases, and previously unheard gems from the imprint’s deep archives.  The label has decided to kick things off with a reissue of The Gerbils’ 1998 debut album Are You Sleepy? While the E6 collective is best known for the likes of their flagship acts — The Apples in Stereo, Olivia Tremor Control, and Neutral Milk Hotel, there were plenty more bands that were a part of the collective. The Gerbils in fact shared two members, Scott Spillane and Jeremy Barnes, with the aforementioned Neutral Milk Hotel. But in many ways the band was on a bit of a different trip than any of the above mentioned groups.  Although I suppose there’s something about the fuzzy 4-tracked vibe of tracks such as “Fluid” that definitely seemed to have caught a bit of an On Avery Island contact buzz. In retrospect, it’s easy to see why this album flew a little under the radar back when the album was originally released in 1998, and why that same album is a much needed tonic in 2019.

At it’s core, Are You Sleepy? is a killer lo-fi indie rock album.  Exactly the kind that a lot people were getting burned out on in the year of it’s initial release.  In some ways, I think the whole E6 phenomenon made such an impact back in the late 1990’s was because they took the psychedelic sounds of the 1960’s along with a few 1970’s progisms and filtered them through a then modern lens, ditching alot of indie rockisms of the day along the way while keeping the do-it-yourself asthetic intact. The Gerbils had one foot in both worlds; still lamenting the girl that went without them to catch the Portastatic show, and name checking Sebadoh in between getting their psych on.  When the group does try to get in on some of the more progressive sounds of their peers, like on the experimental “Wet Host,” it sort of falls flat compared to other more indie-pop flavored tracks on the album such as as the hooky opener “Sunshine Soul.”

So, for those who aren’t total record nerds, Are You Sleepy? probably passed you by on it’s initial trip around the sun.  But now it’s back, and it will feel like an instantly familiar yet fresh platter that might make you just a little nostalgic for days gone by when everyone wasn’t glued to a screen, and indie rock didn’t sound like it was trying to sell you a pair of jeans so hard. The dream of the late 1990’s is still alive after all. God bless the Elephant Six Recording Company and all who sail with them.

Buy the album via Elephant 6.

Join 330 other subscribers
Follow The 13th Track on WordPress.com