Local Band Feel is a column dedicated to shining a light on music that’s happening around the corner, down the block, or a few towns over in our particular corner of the Pennsylvania wilds.  We encourage you to support the bands featured, should you feel so inclined.

Jamie Kali lives one city over from me.  Wilkes Barre is the Shelbyville to Scranton’s Springfield.  If you live in there, your perspective is probably vice versa (at least I hope that it would be).  That seems like that’s the way that it’s always been, and probably will be forevermore.  Putting all of my sister city biases aside, Ms. Kali along with her compatriots have crafted something pretty interesting with their latest release; a self-titled, and self-released effort credited to, Kali Ma and the Garland of Arms.  What’s offered here is a bakers dozen of dreamy neo-psychedelic tunes that seem to take more cues from Grace Slick’s early Airplane flights than Lennon/McCartney for once, which is a nice change of pace.  We recommend you crack a Steg and settle in for a long strange trip down the electric mindshaft for this one.

Motel In Saginaw from the heretofore-unknown group StumpWater is another winning archival discovery from the trusted ears of the Drag City label which is being reissued for the first time in conjunction with Galactic Zoo Disk.  Originally self-released in 1973, the amazingly still-active Aurora, Illinois based group’s unearthed album is a denim clad sepia toned slice of conceptual folk rock. The whole damn thing is so professional sounding and spot on, that you might even find yourself checking the record’s label for a steamboat; if you know what I mean.

The album is based around a group of characters that populate the small town hotel that gives the record its name. Using it as a conceptual framework on which the group hangs the occupants’ sad and desperate tales of loneliness. Sound wise; it’s all beautiful shimmering minor key strumming and tight vocal harmonies that would probably even impress the Croz himself.  The writing is pointed, and mostly devastating character sketches that don’t let anyone off easy.  “Romantic Courtship Turns Into Boring Marriage Blues,” unflinchingly details the decay of a relationship; the writing boasts an approach, and a dark humor which is very similar to another one of the era’s new Dylans, Loudon Wainwright III.  Elsewhere, the album deals with death, “Now That He’s Passed Away,” isolation “The Hermit,” and the addiction “Tired Man” with the same type of direct songwriting precision and skill.

Motel In Saginaw sits nicely alongside such other real people loner folk epics such as label mate Gary Higgins’ Red Hash and David Kauffman and Eric Caboor’s Songs from Suicide Bridge.  Much like the aforementioned albums, the record’s bleak subject matter may be a bit too heavy for some to take.  But for those that hang in there though the dark roads the group takes you down, there’s two rays of light that break through the existential gloom that hangs over that Saginaw motel in the form of the album’s two closing tracks; first there’s the wonderfully disarming title track which is love song in the truest sense of the word, and then the stunning album closer “A Thousand Voices.”  These final two songs speak to finding love and salvation in others in order to break out of the confines of one’s own self-imposed prisons.  The stories this album tells are universal; ones that are able to speak to the heart of the listener as much today as they would have in 1973.  For those who aren’t afraid to go a little dark, it’s check in time.

In a pawn shop circa 1974, Edward Larry Gordon made a fateful decision.  Following a clear and present inner guidance from deep within, he traded in his guitar for an autoharp. From there, he embarked on a quest for musical enlightenment, and never looked back. Taking on the name Laraaji, he would begin the building of a massive body of work comprised of his own unique ambient New Age stylings.  One of the most well known stops on his journey was a collaboration with Brian Eno that resulted in the album Ambient 3: Day of Radiance which was released in 1980.  The meeting between the two artists seemed the result of cosmic will, as it was due to Eno catching the artist busking in Washington Square Park.

The self-proclaimed Celestial Musician though has plenty more to offer for those intrepid inner space explorers who choose to dive deeper into his work.  Thanks to the folks at the Telephone Explosion label and in conjunction their new imprint Morning Trip, we’re getting a reissue of his 1986 album Celestial Realms.  Originally released a cassette, it is a collaborative effort between Laraaji and Lyghte (a.k.a. Jonathan Goldman) which consists of two side long explorations into deep inner space.  Lyghte provides a foundation of low sustained guitar and crystalline ambient synth drones, while Laraaji sails above the foundations providing otherworldly sounding bell tones and zither work.  One might make the mistake of turning this album into a passive listening experience. However to do so would be missing out on all that’s being offered here.  As one contemporary critic was keen to point out, this isn’t background music for dishwashing.  If you’re lucky, some active listening of Celestial Realms might just result in the shifting of some brain waves at the very least, and possibly even provide a bit of inner healing.  If you think you’re ready to hop on board, then prepare yourself to beam up now.

Order the album via Telephone Explosion. 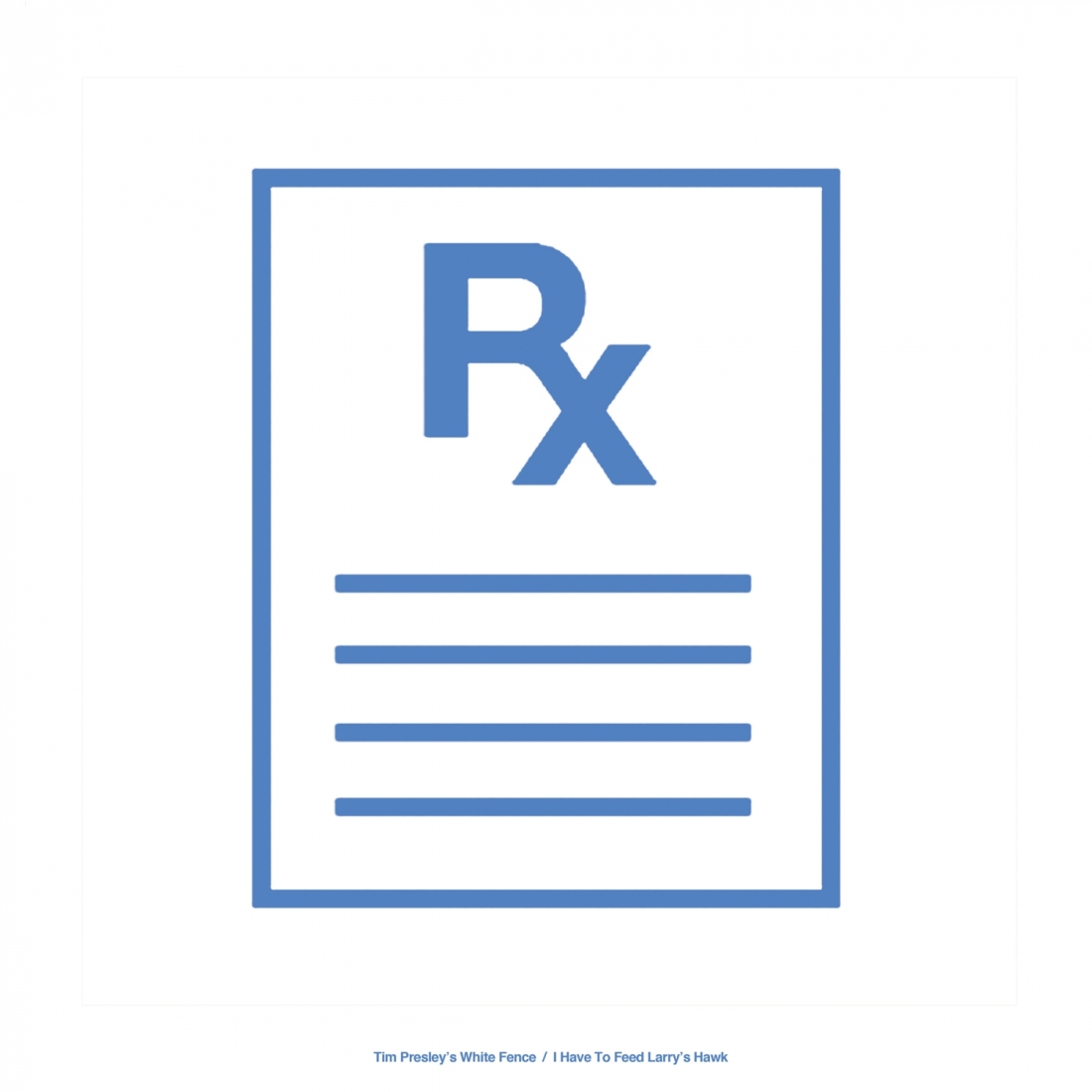 I Have To Feed Larry’s Hawk is the latest from neo-psychedelic wunderkind, and occasional Ty Segall collaborator, Tim Presley.  It’s a cryptic, and delicate song cycle that began it’s life in the rural United Kingdom town of Staveley, before being committed to tape in San Francisco, where it used to be a good move to be sure to wear flowers in your hair.  A fact that I don’t think was lost on its creator, as the city’s past psychedelic vibes seem to have gotten under Presley’s skin on the resulting LP.  While the finished product bears the audio and aural markings of both locations, it also remains content to float in its own peculiar pharmacological bubble outside of time and space.

The album feels like one of hazy rebirth.  You get the Barrettesque sea legs of the title track, and the Beefheartian shuffle of “Until You Walk”, along with the ode to the mysterious locale of “Fog City,” presented to us in two versions that only help to add a generous helping of disorientation.  The album’s primary 12-song cycle is built on this theme along with two additional instrumental pieces of Harm Reduction that seemed geared to assist the listener with the sometimes bumpy reorientation process.  You’re going to need it, as this new internal world is populated by both natural wonders and piss covered floors.  Set free to find a new illusion?  This seems to be the main dilemma the album is grappling with.  I Have To Feed Larry’s Hawk ultimately leaves the listener to decide the answers for themselves.  Be forewarned, regardless of what you think, that hawk still needs to be fed.  As Presley notes, there’s always a danger in leaving the past.

It’s 1974, the Memphis group known as Big Star are holed up in Ultrasonic Studios in New York, and they’re starving.  As then bassist John Lightman explains, “…we were all very tired and hungry. we had low blood sugar. They wouldn’t let us leave to get food because they thought we wouldn’t be back in time for the broadcast.”  This was a band looking for more than just a quick bite; they were striving for the chance to finally live up to their name.  It wouldn’t happen the way they hoped it would, but there was no way they could have known that then.

Live On WLIR is Omnivore’s reissue of Big Star’s incendiary 1974 live in the studio performance for New York’s WLIR-FM.  It’s one of the few documents we have of the Alex Chilton led group performing in the actual decade in which they created their slim but still influential body of work.  If you’re a neophyte to Big Star, and the whole Bell/Chilton saga, then in all honesty this release isn’t probably the best entry point.  Just go buy a used copy of the #1 Record/ Radio City two-fer on CD, or some reasonably priced reissues.  Get back to me whenever you’re ready.  For those still hanging around, let’s get down to the nitty gritty.

It’s not the first time this set has seen the light of day, for that see Rykodisc’s 1992 release Live.  The EQ’ing and mastering is a little different for this edition, and in all honesty both versions sound good.  Though to these ears, this new one sounds a little more geared to accentuate the rock.  I’ll save the entire deep dive A/Bing comparisons between the two for some geek on The Steve Hoffman forums.  What will be important for most is to finally have this set readily available on vinyl.

The lineup on here is a power trio featuring Chilton doing all the rhythm and lead guitar work (which is honestly a joy to hear), with then fresh recruit John Lightman on bass, and the ever reliable Jody Stephens on drums. Sorely missed on this set are founding members Chris Bell, and Andy Hummel.  What’s good on here though is really great.  Since the set was recorded live to two-track, it presents the band sounding lean, mean, and with absolutely no frills.  There are even some technical hiccups as the sound guy mixes the band’s performance as it goes, which if you ask me only adds the audio vérité of the proceedings.  You will also get a delightfully thorny, and at times awkward interview between Chilton, and DJ Jim Cameron, which is classic Alex.  There’s also a nice acoustic performance in the middle, which is heartrending stuff.

The timing on when this set was captured is probably what’s most important.  In just a few months, Big Star would collapse into a black hole of sullen entropy that would result in the sessions for their brilliant third and final LP.  After that, Chilton and Stephens would split.  Despite the latter day reunions of the group, this is one of the few chances you have to hear Chilton fully committed to playing these songs with an unbridled enthusiasm, as opposed to the levels of detachment that he would approach most of these songs with in later years.  Despite of all of his grumbling during the interview about how scummy it is being on the road or low album sales; it doesn’t sound like the dream of Big Star had completely died for him yet.  Not at least on that day in 1974, and sometimes timing is everything.

Join 330 other subscribers
Follow The 13th Track on WordPress.com